“One of the fellowship will greet you.”

It sounded as if we were to meet a wizard or elf, which seemed fitting, surrounded as we were by stately cedars and hemlocks on a secluded, sparsely populated island.  But the volunteer driver who picked us up from the Texada airstrip carried no otherworldly staff, nor did he sport pointy elfin ears.

Retired from the Canadian military & originally hailing from Alberta, he did, however, have a generous nature.  Ray not only drove us to the Ravenous Raven Restaurant for lunch, but he also toured us around the town of Gillies Bay in his car.

Ray knew Texada airport well, having taught for several years at the Texada AeroSpace Camp.  I wish I were 10 years old again, so could go to the camp!  They have  super-cool equipment & demos, such as a wind tunnel with computer driven sensors, a half-scale Sopwith Pup, and a working model rocket launching system, designed by Texada resident Sandra Sims (pictured above).

Just past the residential town of Gillies Bay, on the western shore of Texada Island, we stopped for a photo of Dick’s Island, which is only an island at high tide and is currently for sale at a cool $3 million.

Nearby Shelter Point Park is a gorgeous, forested area fronted with a beach-side view of the Georgia Strait.  Ray informed us that the adjacent Bella Maria Campground  is extremely popular in the summer. 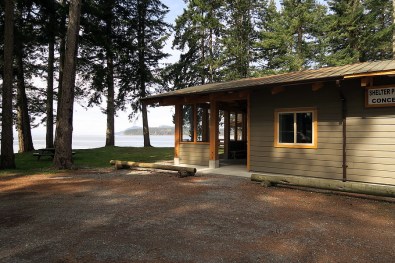 After our mini-tour, Ray dropped us off at the Ravenous Raven. We’d phoned in advance (604) 486-0471 and talked with Janet Bott, island inhabitant and one of the owners of the Raven.  It was she who had provided phone numbers for “the fellowship”, several resident volunteers who drive visitors about for a donation.

There are a number of bicycles available at the airport for those who wish to ride into town, but we’d been uncertain of how steep the climb would be returning from town to airport.  We can happily report that the quiet, pretty road into town from the airport is a gentle descent, and we’re determined to cycle it on our next visit.

The Raven, as seen from the road 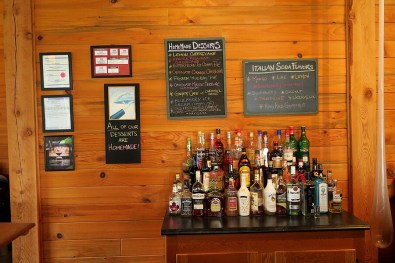 The congenial atmosphere at the Raven perfectly complemented the mouth-watering food. I had a home-made vegetarian bean burger & salad, and David went with a succulent and flaky halibut with chips.  The heavenly chocolate orange cheesecake is made by Janet herself. 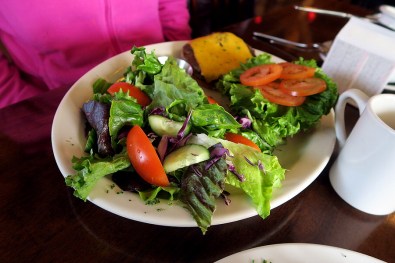 Afterwards, Janet showed us one of the delightful rooms available for rent above the Raven, which boasts a lovely balcony view of the Bay itself.

Filled to the brim with great food, we strolled along  the Dr. Sanderson trail, which meanders beside the western shore of Gillies Bay.  The little trail provides  picturesque views of the beach, as well as glimpses into the inventive backyards of the locals.

For those who don’t have a plane, you can fly into Texada via KD Air .  If you’re not flying into Texada, you can reach the island by car by taking a 35 minute ferry ride from Westview in Powell River to Blubber Bay on Texada Island; check out the BC Ferry Schedule here.  If you’re coming from Vancouver, you’ll first have to take a ferry from Horseshoe Bay to Gibsons, then drive to Powell River.

Avgas is available at Texada/Gillies Bay airport (CYGB).  The airport is camping-under-the-wing friendly & has a flush-able toilet and potable water. 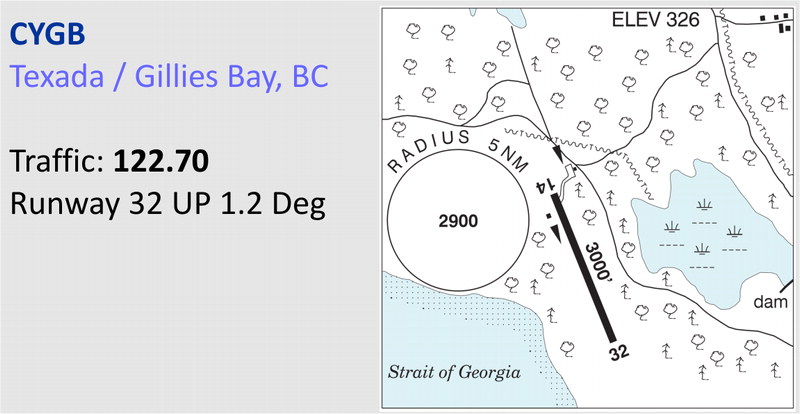