8:20am–On the road!  We woke up to thick mist and light rain, cooked eggs & toast in our rented cabin at Tradir Guesthouse, loaded everything into the car, and started driving west along route 54 on the Snaefellsnes Penninsula. It was a 15 minute drive to our first stop, Bjarnarfoss waterfall.

8:35am–Bjarnarfoss waterfall—Bear Falls is right by road 54, where the main road splits to Fróðaárheiði leading to Ólafsvík in the northern part and to Búðir and Arnarstapi on the south shore of the peninsula; there’s a large, gravel parking spot. Bjarnarfoss was deserted & peaceful at that early hour & we were the only ones present in the drizzle. 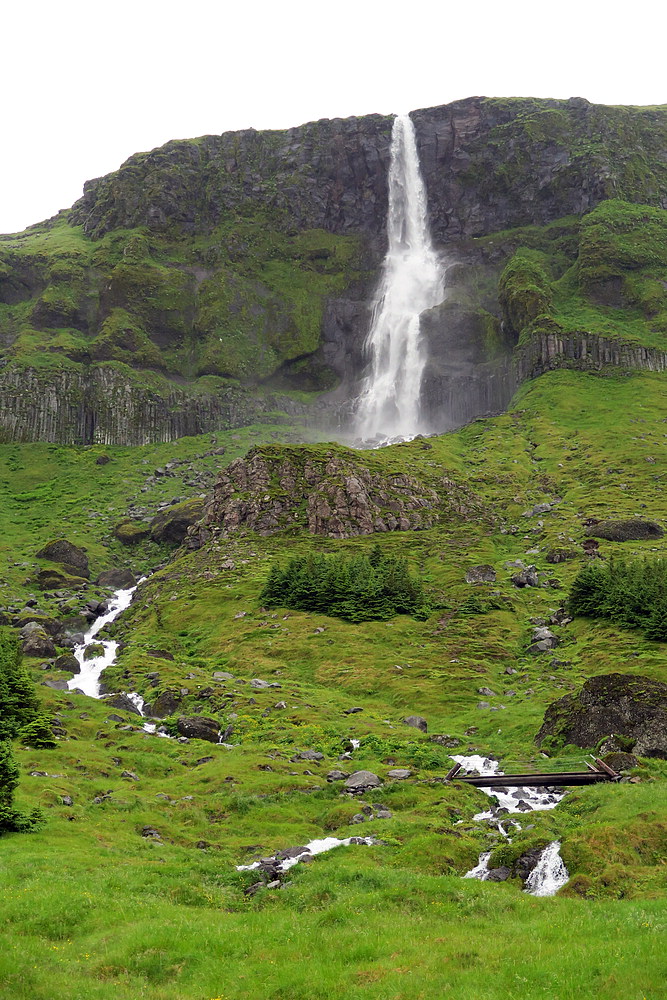 Captivated by the falls, we walked up the paths and about the picturesque cascades of water and groves of small trees & bush while birds wheeled and called overhead. Picnic tables & the general elevation of the falls gave every indication that on a day that was not fog-soaked, the view of the surrounding farmland and sea would be splendid.

We’d next drove about 20 minutes west along route 574 to Lóndrangar Viewpoint, where we briefly stopped to snap a soggy photo and enjoy Iceland’s special summer dampness before proceeding for three minutes’ drive to Vatnshellir.

9:50am–Vatnshellir Cave Tour—This 8000 year old lava tube is located about 25 minutes west of Bjarnarfoss, just before the junction of route 54 & 574.  On the day we visited, the easy 45 minute spelunking tour had drawn a crowd of 17 folks. 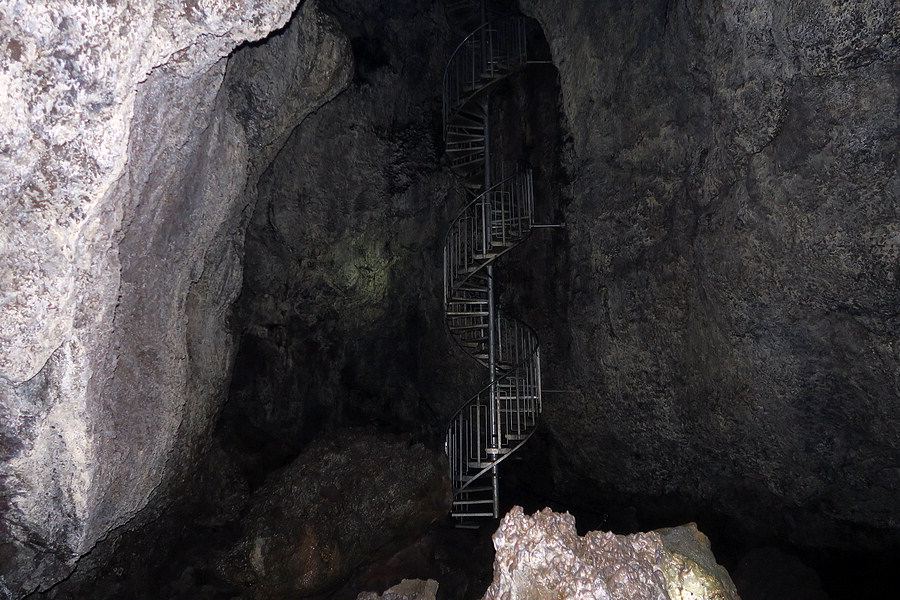 By the 10am start-time, the wind was heavily gusting, with droves of drizzle attacking us aslant. We were relieved to descend the subterranean, spiral staircase to explore the ancient lava tube & get out of the weather! 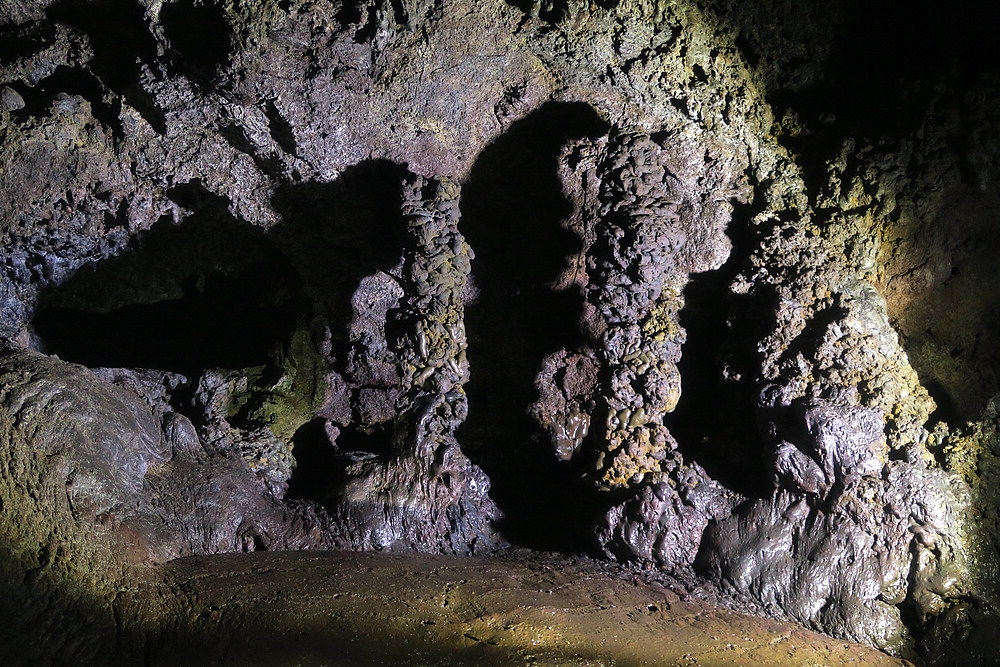 The porous volcanic rock of the cave means there are absolutely no echoes whatsoever… a rather uncanny experience. We’d booked the tour in advance, which proved necessary; drop-ins were turned away, due to the popularity of the tour. 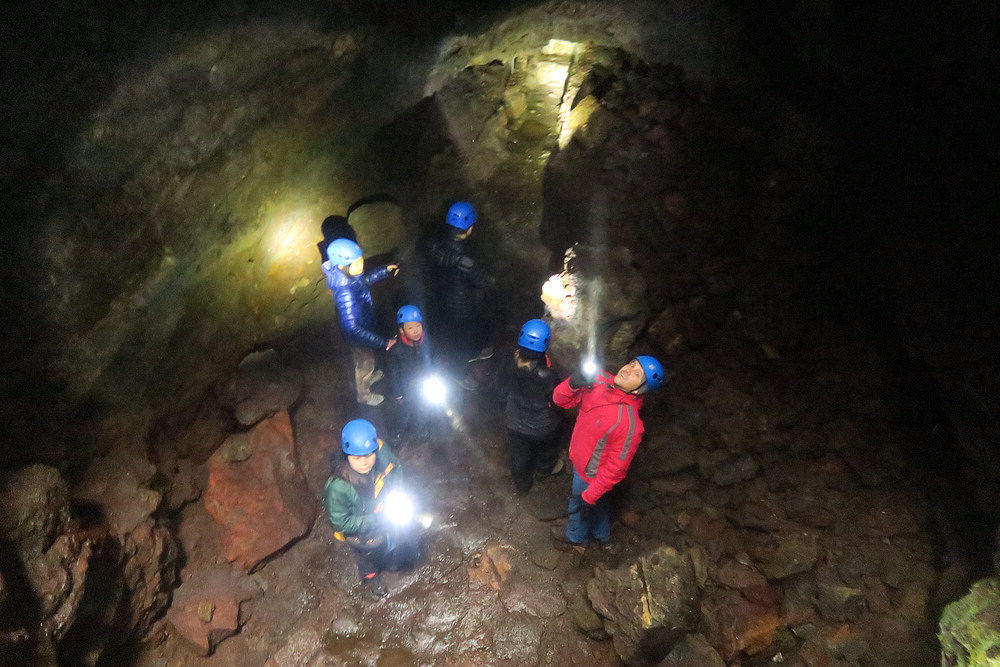 As our group exited Vatnshellir, the next tour was about to begin–with an astonishingly large crush of people.  From Vatnshellir, it was then about 6 minutes’ drive west along route 574 to Djúpalónssandur.

11:15am–Djúpalónssandur Black Sand Beach & Gatklettur—The amazing sea stacks at Djúpalón resemble an elf church and a kerling, or troll woman, but when we visited, they were hidden behind heavy cloaks of fog, with only dark shadows suggesting their existence. Chunks of twisted metal scattered across the black volcanic sand beach from the tragic 1948 wreck of the English trawler Eding, add to the sombre atmosphere created by Svörtulón or the Black Lagoon, just behind the beach.

The Aflraunasteinar – Steinatök or lifting-stones, on the “black pearl” beach were apparently used to measure the strength of fishermen in Iceland, centuries ago– we didn’t attempt to lift them!

The rock formations on the trail to the beach include Gatklettur, Rock Arch. If not for the combination of gusting icy wind & rain, we could have easily spent upwards of 40 minutes here. 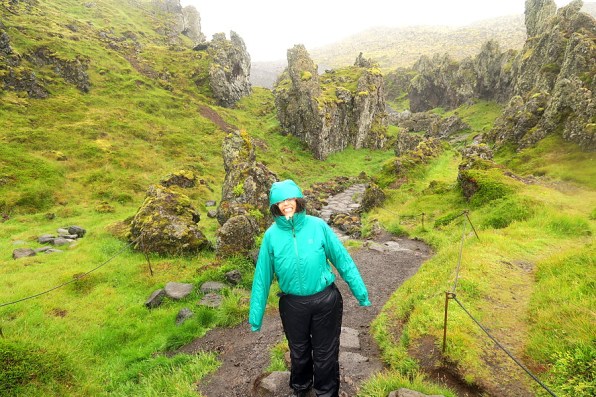 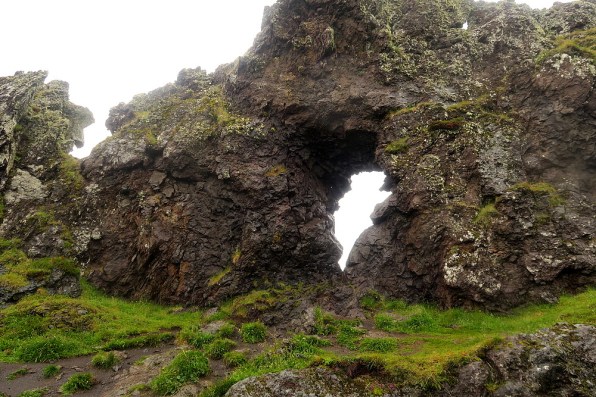 From Djupalon, it was then about 12minutes driving west along 574 to Saxholar Crater.

12:10pm– Saxholar Crater—We ate a pre-packed lunch in the car at the base of the crater, in the red-gravel parking lot which is visible from the road, and waited for the rain & wind to die down.  The 15 minute staircase-climb up the amazingly red crater must surely on a clear day provide a stunning view of the surroundings, but all we could see was fog-soup. Staring into the bowl of the crater was a little anticlimactic after the suspense-building climb… but still worth the effort. 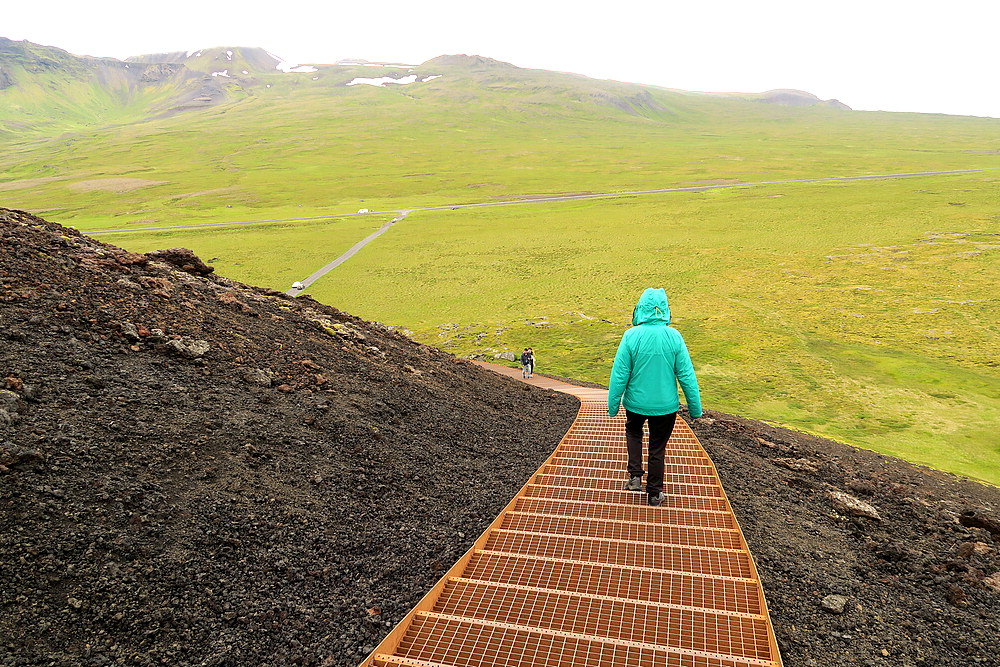 Plan to spend about 30 minutes here (or slightly more, if you’re having a picnic lunch in the car!) We then drove about 40 minutes east along route 574 & 54 to Kirkjufell.

1:10pm–Kirkjufell and Kirkjufellsfoss –Here, the weather cleared up, and we gleefully spent ample time taking far too many photos of this iconic, most photographed-in-the-world waterfall and mountain, just because we could take photos since the fog was gone! 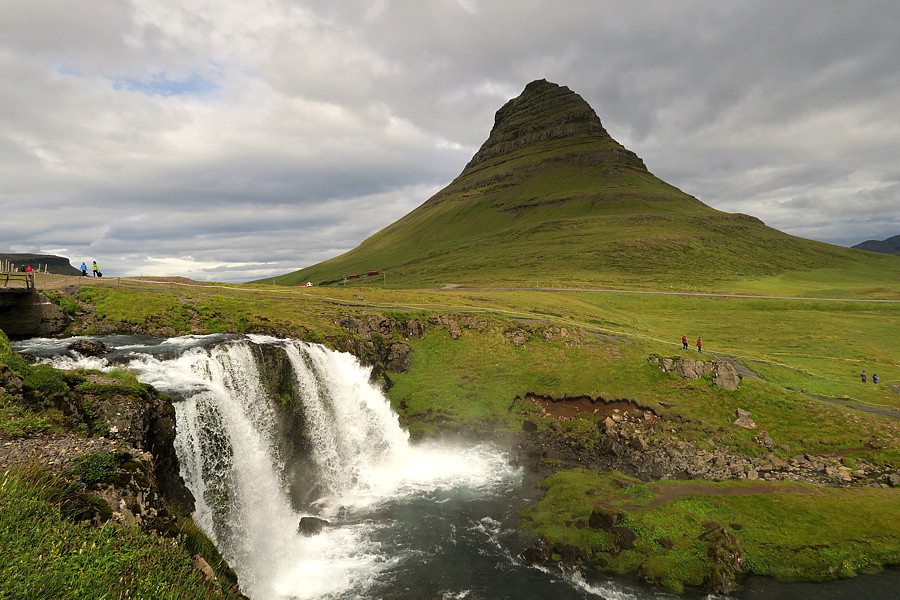 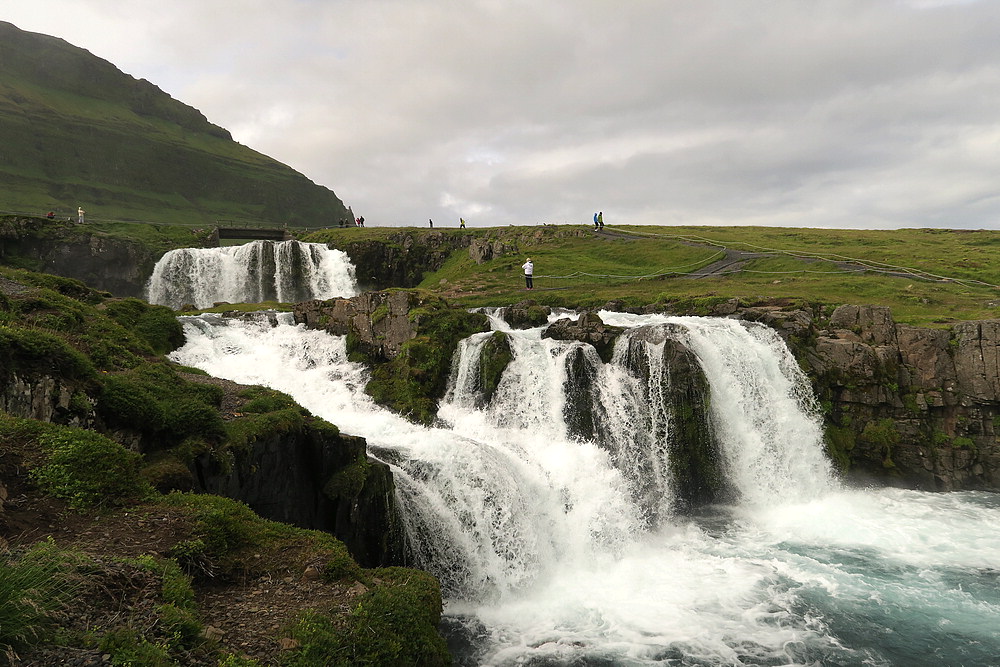 We then continued east along the now-dirt route 54, having circumnavigated the Snaefellsnes Peninsula.  The road was in great shape for a dirt road and was easy to drive in our 2wheel drive car. From Kirkjufellsfoss, it took us about 1 hour 40 minutes to reach our next destination, Erpsstadir, but the drive along the fjord of Hvammsfjordur with its many tiny islands, flanked by green farmland that was in turn dotted with red-roofed white farmhouses, made for a very pretty drive.

When we reached the T-intersection for route 60, we turned right and continued on to Erpsstadir.

4pm–Erpsstadir—This roadside dairy farm on route 60 (closes at 5pm) is the perfect spot to stretch the legs & sample some local ice-cream.  David tried a generous scoop of ice-cream made from fresh Icelandic blueberries, which wasn’t gaggingly sweet like the corn-syrup-dense  ice-creams that plague North America. I debated between a dandelion ice-cream and a small tub of thick skyr with rhubarb syrup and chose the skyr, which was thick and tart; the sweet rhubarb syrup complimented it perfectly.

Then it was a 1 hour 10 minute drive down route 60 between impressive cliffs riven with tumbling waterfalls, to route 1, where we headed north to Saeberg HI, located on Rejkjaskolavegur Road.

6pm:   Saeberg HI hostel– Sæberg/Farfuglaheimili HI Hostel, Reykjaskólavegur, 500 Stað. We checked into our tiny private cabin by the sea, where we cooked up a veggie stew in the quaint little kitchen and ate by the window while watching a flock of ducks & ducklings bob about the shore.  We thought we might check out the hot tubs after dinner… but the icy rain and wind made us decide otherwise. Overall, the weather hadn’t dampened our spirits in the least: even without blue skies and views of glaciers, there was so much to see, do, & photograph that we had enjoyed a splendid day. 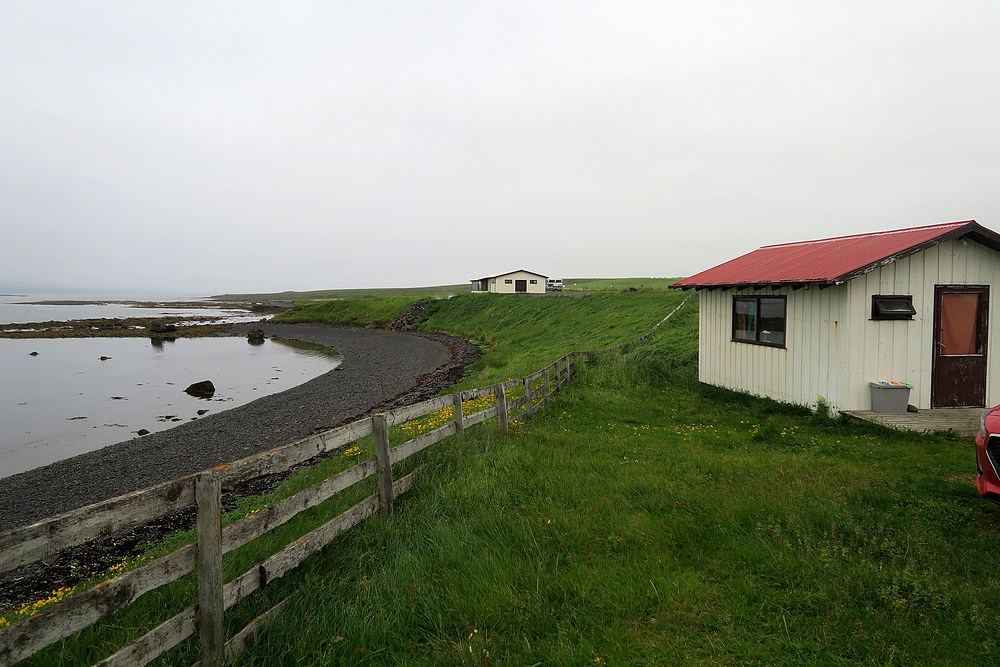 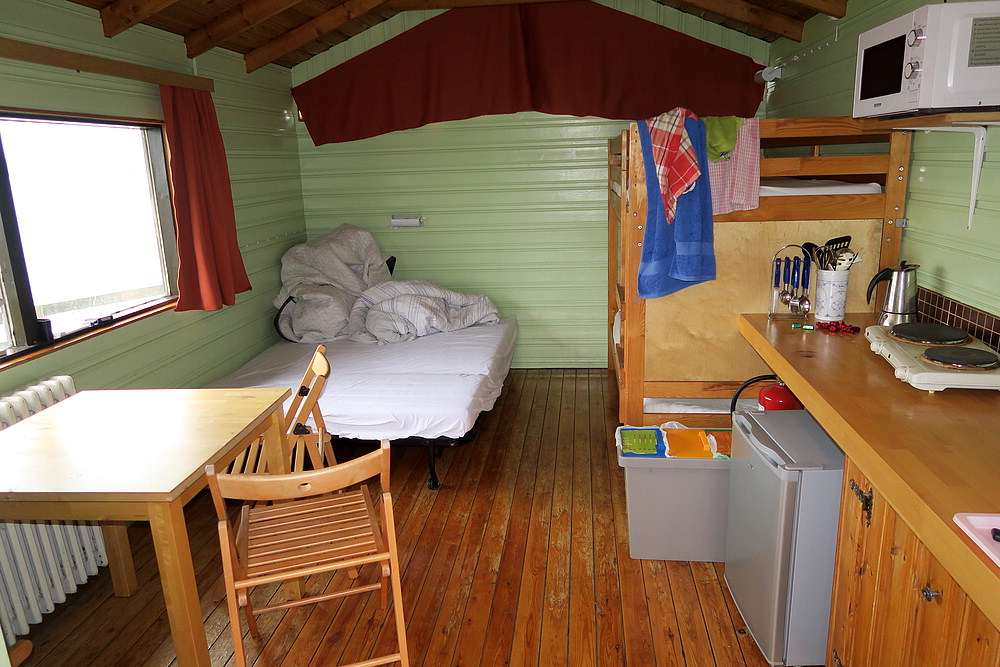 For Vatnshellir Cave Tour, go first thing in the a.m., before the rush, and pre-book. Dress warmly; the cave is very cold, year round.

For booking a private cabin at Saeberg Hostel (great for self-caterers & those who prefer a private shower/toilet) you have to book at least 5 months ahead. Same for Tradir Guesthouse!

For Snaefellsnes Peninsula, there are few grocery opportunities for self-caterers.  When you leave Reykjavik, stock up in the grocery stores at Borgarnes before continuing on.