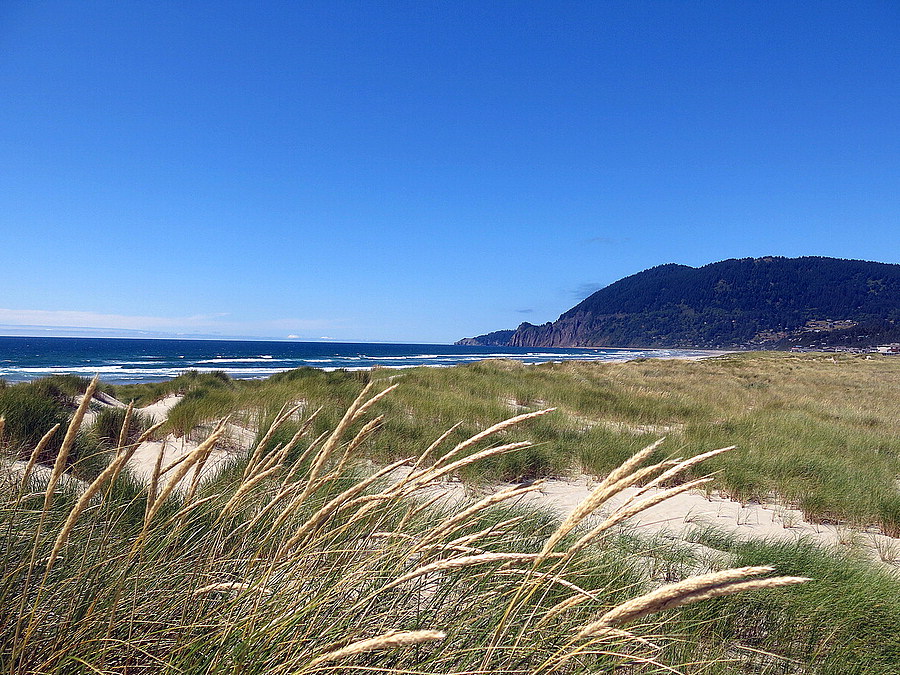 A west coast version of the Caribbean, spectacular Nehalem Bay State Park boasts miles of squeaky white sand, crashing surf, and rolling dunes, under idyllic blue skies (at least, there are blue skies in the summer, if coastal fog isn’t rolling in….) 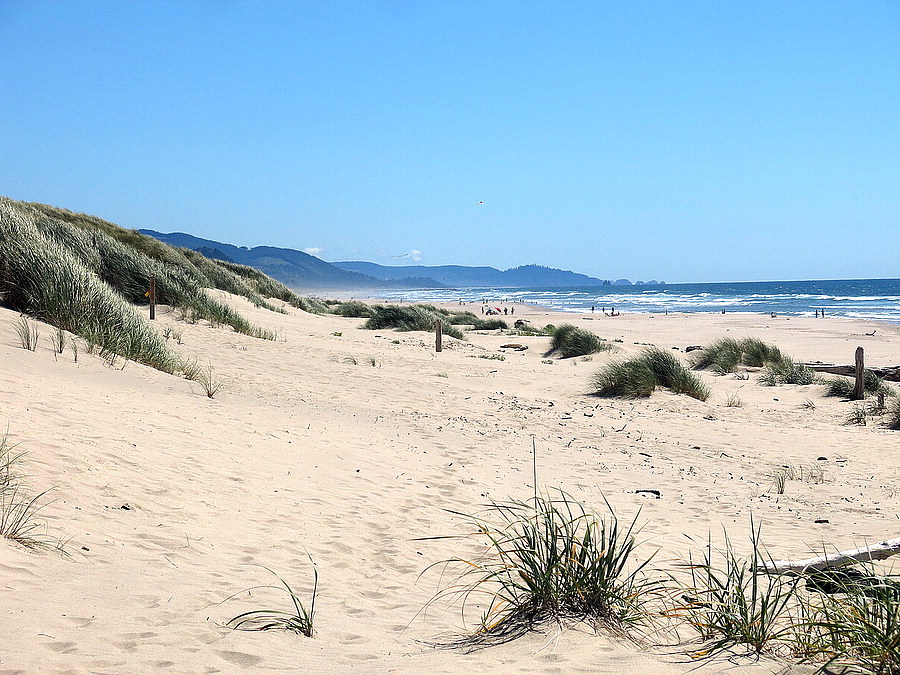 In July, we flew our 172 Skyhawk from BC, Canada to Nehalem’s on-site airstrip (3S7–see pilot airstrip diagram below).  We took along our canine companion, camping gear & food for an overnight stay.

We turned left base over the sand spit; final approach is over Nehalem Bay itself.  Watch out for the truly amazing wind shear on short final!  All that gusty coastal wind suddenly drops right off due to the protection of the surrounding trees and sheltered bay.

After recovering from on of my more memorable landings (I’ll say no more than that, except that right after landing, we watched a pilot with 20+ years experience suffer the same humbling landing), we taxied to one of the little campsites tucked into the forest to the west of the airstrip.

These free campsites are reserved for pilots.  They’re secluded, peaceful rudimentary firepit-and-picnic-table affairs, separate from the more populated drive-in campsites of the State Park.  (No shower facilities at the airstrip, and a Port-a-Potty outhouse only). 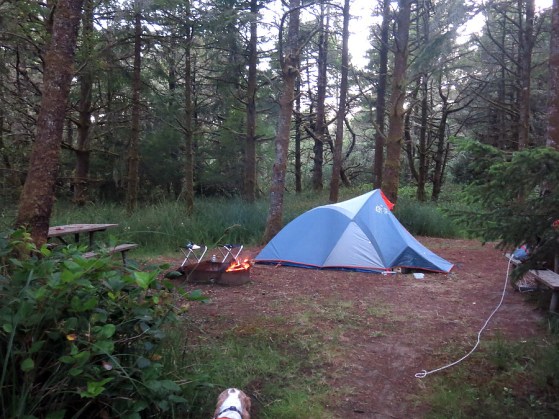 There is drinking/dish-washing water available, via a spout where deer like to hang out at dawn, and I suppose if one were truly motivated, one could cold-water shower under that. Although it was the height of a gorgeous hot, sunny summer, only two fly-in campsites were in use while we were there… and we were one of them. 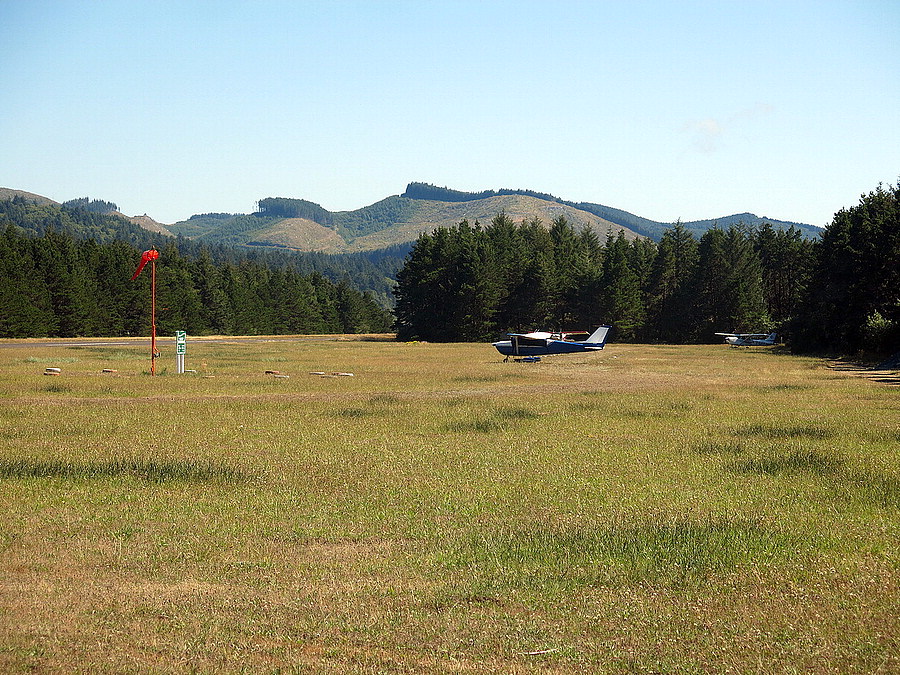 We spent the day romping along the fine white sands of the coast (a short walk from the airstrip through the state park).

After a picnic lunch, we rounded the spit and splashed through the warm estuary of Nehalem Bay. The wind-protected shelter of the Bay is very notable on the ground–not that I’m emphasizing the wind-shear factor for pilots or anything. 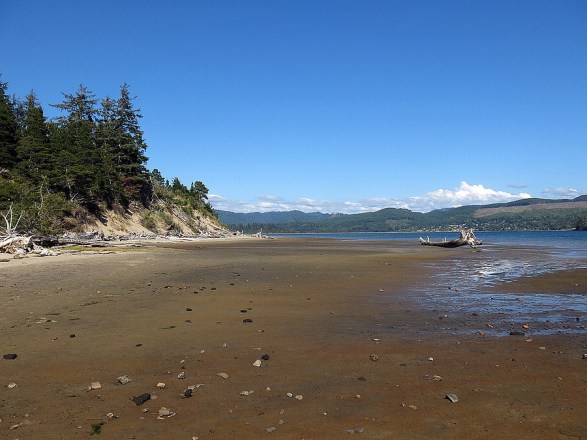 While rambling along the mudflats, a pack of coyotes serenaded us with their eerie wailing.  We saw them watching us from the top of a dune we’d been blithely scampering up and down only moments before; we kept our little dog closer to us after that.

Horseback riding is offered at the park,  but we opted to forego such equine joys on this trip.  For pilots who aren’t self-caterers and don’t mind a vigorous walk into Manzanita, there’s a variety of bistros, cafes, pubs, and restaurants in the nearby quaint little community (approx. 1 mile north of the airstrip).  After roasting marshmallows over the fire pit (wood supplied by the park, 100 low-lead fire-starter supplied by our plane), we had a wonderfully peaceful sleep. 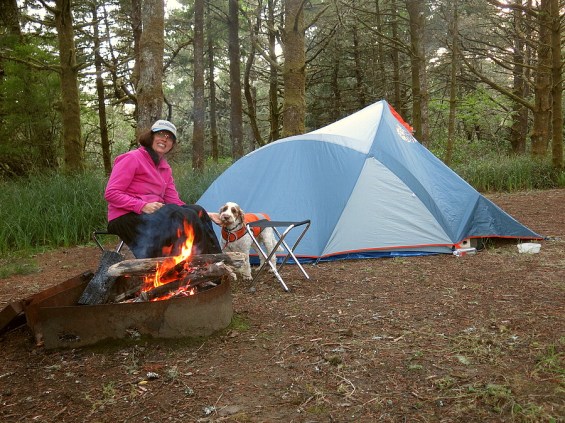 In the morning, we had to scramble like mad to pack up and leave, as did the other pilot who’d camped overnight–marine fog was rolling in, fast.  Neither of us had supplies for a protracted fogged in stay.  We managed to escape just as fog closed in, our hasty departure reminiscent of Han Solo in the Millennium Falcon, barely escaping the closing maw of a giant space slug….