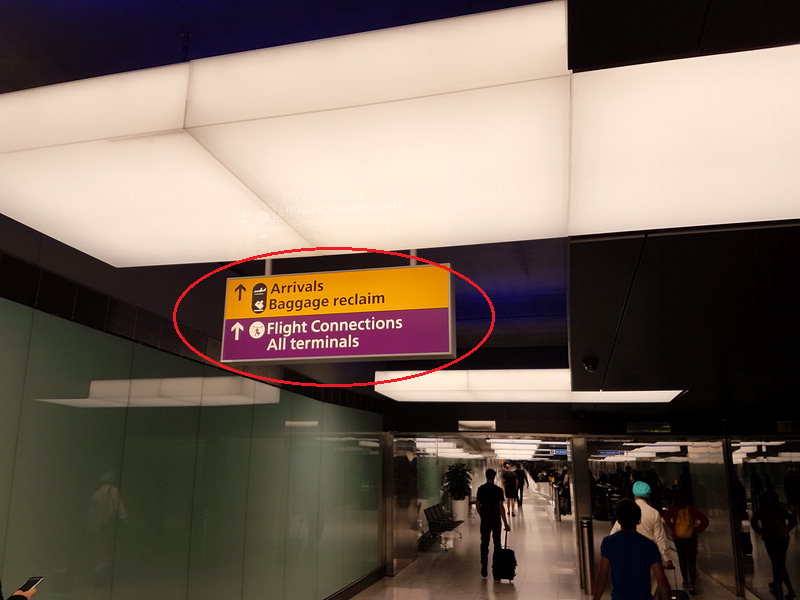 If there are any teens out there contemplating doing London without parents, the following photo instructions will get you from Terminal 2 to the Paddington Express with no problems–successfully tested by a 15yr old traveling alone for the first time!

Summer of 2017, our 15 yr old daughter wanted to fly alone from Vancouver, Canada to London, then take the train alone to Paddington Station for a week of adventure with former school pals.  Navigating Heathrow airport & the train system was the big mountain she had to tackle alone to make it work.

On a business trip to England several weeks prior to her departure, David meticulously photographed where she’d need to go to get herself from the airport, through customs, to the Heathrow Express train station.  Heathrow Terminal 2 is well organized, with lots of signage.

She opted to go with wheel-on luggage only, to save the hassle of checking in a big suitcase (which could possibly get lost), and lugging it through Heathrow to the station.

Getting from the plane, through Immigration & Customs, to the Heathrow Express station:

If you come to a fork, always follow the YELLOW signs.  Yellow is always arrivals and immigration.  Purple is always departures and connections.

The Heathrow Express to Paddington takes 15 minutes (the Connect stops at every station en-route and takes way over an hour).

Buying the Heathrow Express tickets online prior to leaving your home country, and printing them to bring with you, saves the hassle of trying to work out the ticket machines and foreign currency with a sleep-deprived, anxious brain.  Buy the tickets at:

Once on the train, a conductor took her ticket and she could triumphantly relax for the 15 minute journey into London!

The Heathrow Express website says that kids aged 15 & under travel free in Express Class if they have proof of valid air travel, such as a boarding card, but our teen wanted the assurance of having a ticket in hand.  Booked tickets are valid for 3 months from date of purchase.  If you book a return Heathrow Express ticket, it’s valid within 1 month of your date of traveling into London.

Note: we also found a blank UK Border Landing Card online & filled it out for our teen, so she could copy it during her outward journey while on the plane (on a real card handed out by an airline attendant).  Having this to copy, when she was sleep-deprived from her red-eye flight, reduced any anxiety about what would be on the form.

She arrived without hitch and spent a week exploring London: Chin-Chin’s Lab for liquid nitrogen ice-cream, Camden Market for old-fashioned vinyl records, the London Dungeon (which she says was cool and creepy), and street performers (contortionists who involved beds of nails, and squeezing their entire body through a tennis racquet) at Covent Gardens, among other things she’s yet to tell us about!